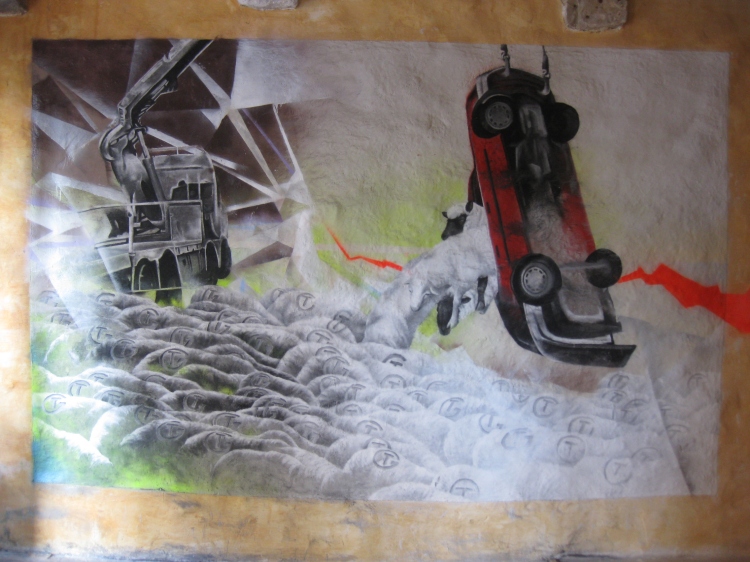 What is considered as power and fame? What does it stand and mean to be the controller of the mass? This triptych mural installation is about how this society is controlled by deliberate information through mass-media and ruling class. Mass hysteria that happens due to provided information as one of social problems, which is uncontrollable and unexplainable, has been my interest: this installation was made during my participation in a residency program in Caylus, France, and my public project Ubiquitous Controller Press also took place for both a part of this installation and a public space project.

The space I used as a studio was an empty building, in which first floor was offered for a studio space for artist for free, so I utilized the entire space not only as my studio but also an experimental installation where each individual pieces have narratives/stories as a whole.

The three murals are made by charcoal, chalk and spray-paint. A narrative between the murals starts with the first mural of a hanged red car with a flock of branded sheeps. Mural2 is a golden labyrinth; a spray line from Mural1 extends and enters into the maze. As the line goes through the complicated path, which represents as ways and choices of life. The act of drawing the maze – the mural2 – was also a performance. The process of making mural2 was shot for a video piece Selected Poems.

The extended line enters into the field of artificial white flower space where there is an original drawing of ‘controller’ with on/off switch, to which another project Ubiquitous Controller Press has a narrative. It is a metaphor of a controlling center room that provides ‘information’ to the public – ‘information’ as a ruling power. 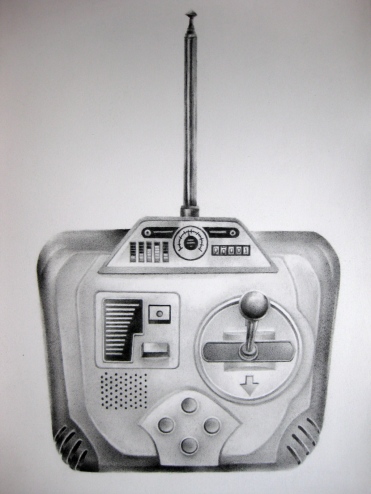 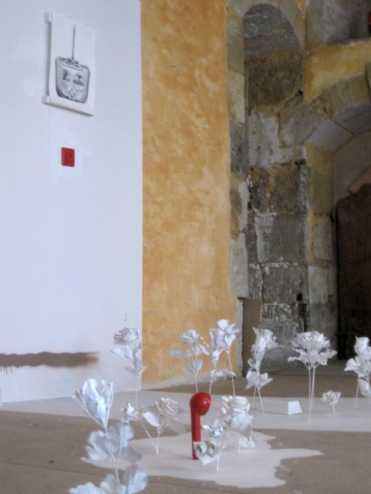 Above white flowers in white-paint-spill-like ponds on the floor, there are hanged fish-lines as if to catch the flowers, in this peculiar sense, it symbolizes the public – mass people.

The narrative between the murals ends at the third mural of the clashed car in black and white. The car is hit on a solid column that may imply contingency or human-spirit, which is absolute and infinite. It signifies how fragile and weak the man-made technologies and commodities are, in other words, human-desires. The studio used as an installation space implies a structured frame of ‘society’, in which human psych prevails. 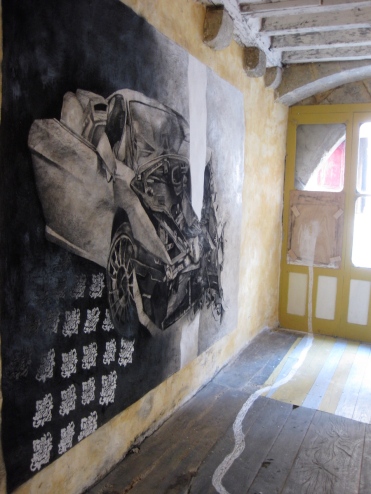